Bands in order of appearance

At PittStop we pride ourselves in getting the best bands and DJ's in the country. As always all of our dances except one have live music. 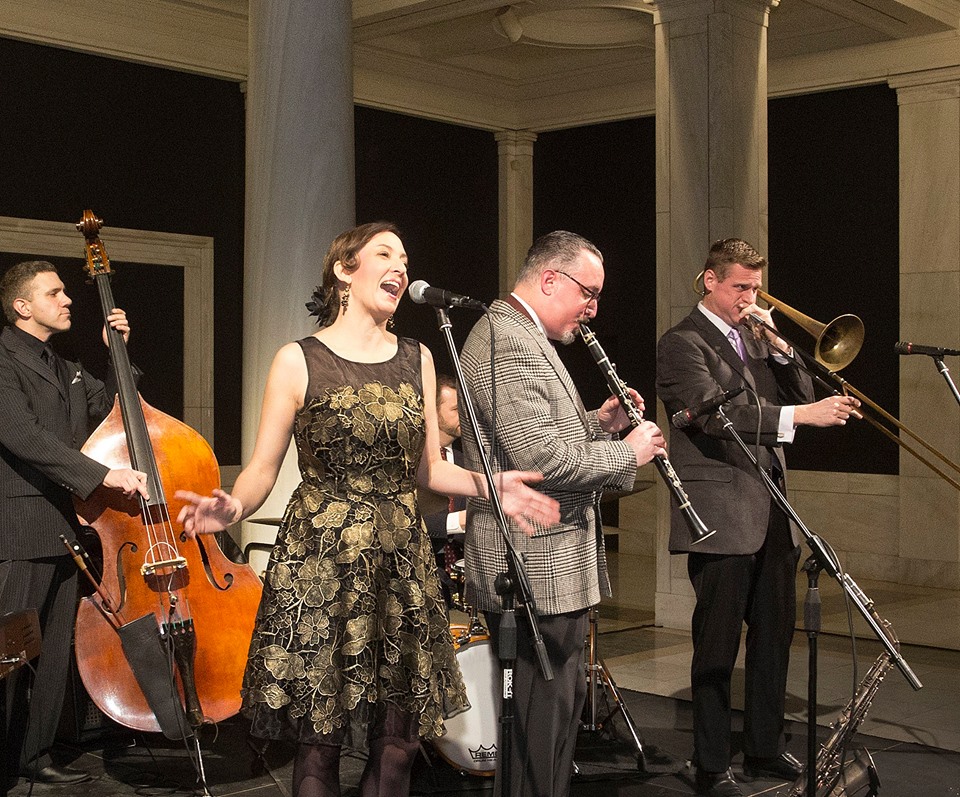 The Boilermaker Jazz Band has performed at every Pitt Stop Lindy Hop, and this year makes number 19! With their unique brand of musical Americana and hot jazz revelry, the Boilermaker Jazz Band brings the party to you! The Band interprets the great American song book in their own unique fashion, bringing the swinging sounds of the jazz age back to life. You’ll hear familiar classics and rarities performed by superb instrumentalists and heartfelt vocalists. From concert halls to dances, festival stages to elegant soirees, listeners and dancers agree — with their infectious beat and enthusiasm this band can make any crowd move!

The Boilermaker Jazz Band has performed at major venues throughout the world, including Lincoln Center and the Waldorf Astoria Hotel in New York City, The New Orleans Jazz & Heritage Festival, Chicago Summer Dance, the Smithsonian Institute in Washington DC, The Edinburgh International Festival in Scotland, and The Jeju Island Swing festival in Korea.

Everywhere they go, they deliver the good feelings that real jumpin’ jazz can create. Paul and the Boilermakers have recorded eight critically acclaimed CD’s and have received rave reviews for their excellent live performances. The Boilermakers have been featured on radio shows across the country and overseas, including a National Public Radio Jazz Series that was broadcast on over 50 stations. The Boilermaker Jazz Band’s music was recently featured on the hit Fox TV show “So You Think You Can Dance” for a fantastic Lindy Hop routine.

Paul Cosentino will lead the band on clarinet, and Jennifer McNulty will be featured on sultry and swinging vocals. They will open our dance Friday night. Gordon Webster will be joining Paul on the Keyboards. 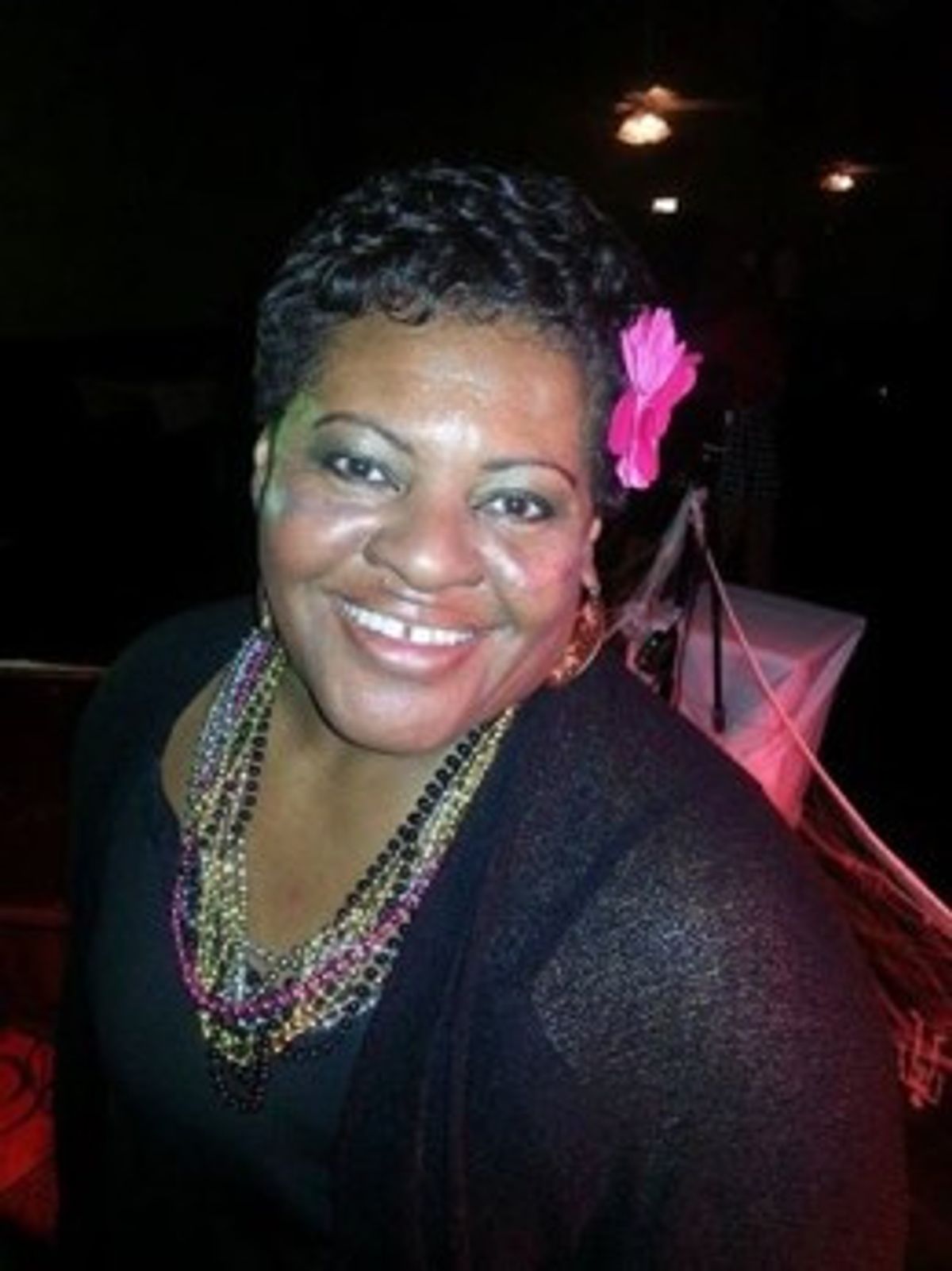 As Pittsburgh's Lady Of The Blues, Miss Freddye keeps the blues alive in her native hometown. She started singing in the church at a young age. The influence of church and her mother's love for the Blues gave Miss Freddye the beginning to venture in the world of Blues music in 1996. She joined the Blues Music Works under the direction of Beg Al Leavitt but then formed her own band, Miss Freddye's Blues Band which has played at PittStop and you all love.

She has a new band, Miss Freddye's Homecookin' Trio which will be cookin' up the Blues for you Friday Late night. Mike Huston has developed a nice acoustic style of blues guitar, keyboard, and vocals. He brings his love of music to blend into Miss Freddye's storytelling thru music! Bob DiCola has the rhythm section on congas and a few other percussion pieces he pulls out from his bag of goodies! He keeps the pace dancing with his hands as he lays down the beat for the music they make together! We know you are going to love this band! She will be playing Friday late night in our new venue The Twentieth Century Club which is like a night club out of the Twenties. See www.missfreddye.com 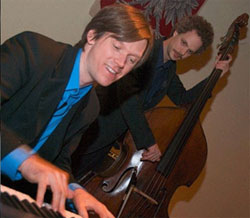 Pianist Gordon Webster is one of the most sought after musicians in the lindy hop world. His tremendous musicianship and passion, supported by his first-hand knowledge of social dancing, have inspired lindy hoppers at hundreds of dance events worldwide. Drawing on influences as diverse as Fats Waller, Count Basie, Oscar Peterson and Gene Harris, Webster serves up a smorgasbord of styles unified by one characteristic: irresistible danceability.

Born in Ottawa, Canada, Mr. Webster began playing the piano at age 4. He moved to Toronto in 1993 to study jazz piano at University of Toronto. In 2001, while still living in Toronto, he became obsessed with the lindy hop and began traveling to exchanges and camps as both a musician and a dancer. In fact, Gordon attended our very first PittStop in 2001 as a dancer. In 2002, Gordon met his wife Katie, a lindy hopper, at Swing Out New Hampshire. In 2004, he moved to New York City to pursue his Masters of Music degree at Manhattan School of Music, where he graduated in 2006.

One of the most active and versatile musicians on the scene, Webster maintains ongoing collaborative relationships with a diverse array of jazz/blues and lindy hop luminaries. Gordon’s band has played around the world and this will be his fifth time at PittStop due to his popularity among our dancers as one of the best Lindy Hop and Swing bands in the world. Gordon will be playing twice for us—on Saturday evening his 9-piece band will play Lindy Hop music sets, and Sunday afternoon Gordon will be back with his 9-piece band playing the best swing music around. Joining Gordon will be Paul Cosentino on Clarinet and sax. 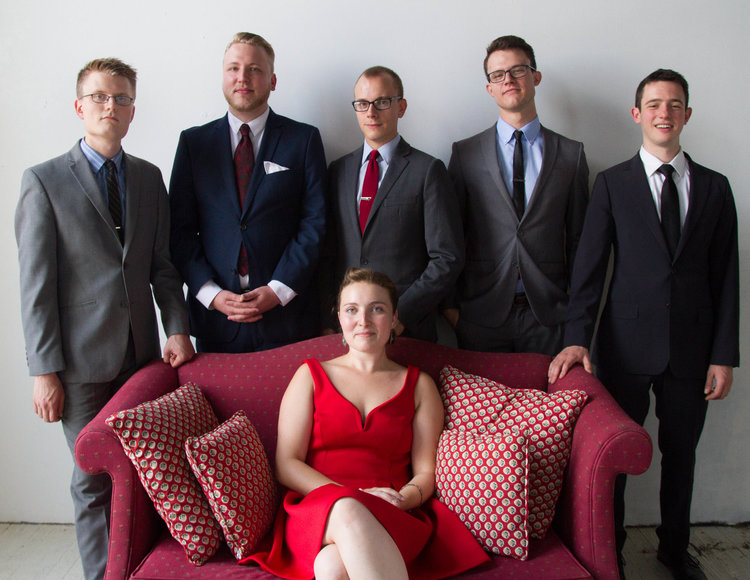 “She’s a true extrovert…even when you watch her sing, she engages you when she sings and makes you feel like you’re part of the story–which is very important.”
~Jazz trumpet player, Terell Stafford

"Chelsea Reed is my favorite kind of singer. She sings the songs as they are intended: beautifully, candidly, with excellent pitch and swagger and very few frills. The Fair Weather Five have the taste and good judgment to back her up without getting in her way, and to swing while they're at it."
~Singer/songwriter, Carsie Blanton

In October 2012, vocalist Chelsea Reed brought five of her friends together to play some tunes in a South Philly dining room. Secretly, her plan was to form a band that played for swing dancers, so she could finally have the chance to sing her favorite songs for an audience that loved early jazz as much as she did. Since that fateful afternoon, those unsuspecting handsome men have comprised the Fair Weather Five: Noah Hocker on trumpet, Chris Oatts on saxophone, Jake Kelberman on guitar, Joe Plowman on bass, and Austin Wagner behind the drums.

Now, over a year later, Chelsea Reed and the Fair Weather Five are at home at swing dances, jazz clubs and concert halls alike. They have played renowned Philadelphia venues like the Kimmel Center and World Cafe Live in addition to touring around the country in a trusty blue van. They love exploring the roots of jazz to find musically creative ways to interpret forgotten songs. Drawing upon the influence of artists such as Bessie Smith, Fats Waller, Louis Armstrong and Billie Holiday, Chelsea Reed and the Fair Weather Five bring the intensity and passion of early jazz to every stage they play to put on one heck of a show.

Here are videos including one from PittStop 16!
PittStop 16 Jam Circle
Bill Bailey 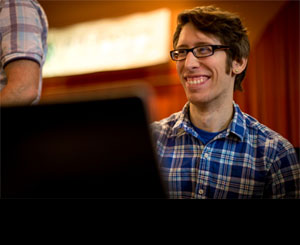 Dan is a veteran DJ with a lifelong musical obsession. He DJs because he loves sharing music, inspiring dancers, and shaping a dance night that meets the energy of the dance audience. He’s spun for events across 4 continents, playing for everything from international events to local dances on a weekly basis and has organized both locally and for events as their Head DJ. He loves coming to PittStop and we love Dan. He constantly challenges himself to bring new material to his fellow dancers and works hard to offer a variety of music in his sets that stays true to the roots of the dance. He loves all styles of music and though his sets tend more toward authentic Jazz and Blues, he can bring any music to the party if the dance calls for it. Dan will also offer private dance lessons during his time off. Don't hesitate to contact him at . 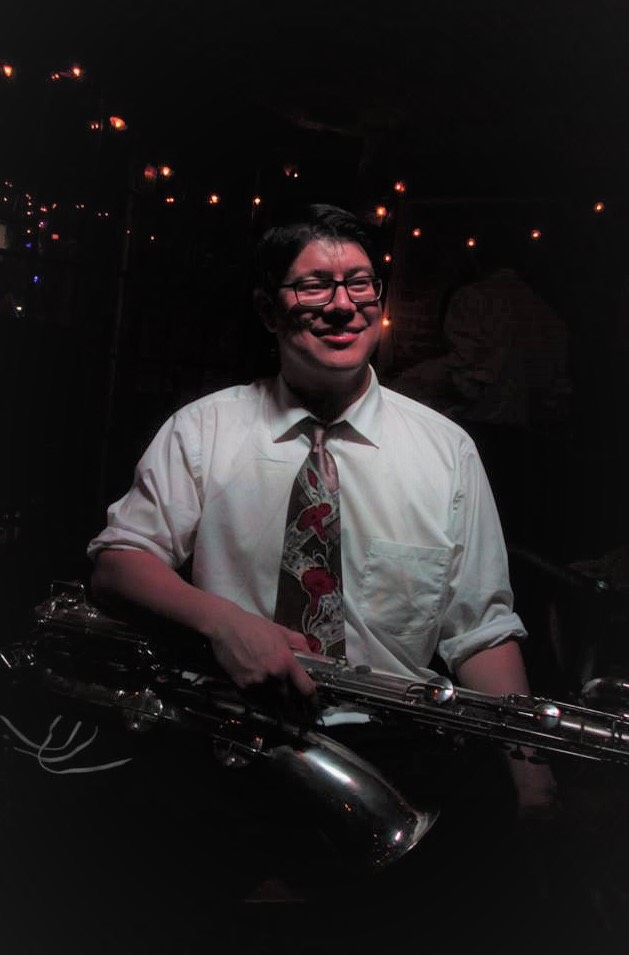 Adam Lee started down his swing path in the 2nd grade when he started playing clarinet, and his grandmother bought him his very first record, which happened to be a Benny Goodman record. Growing up as a jazz musician, the addition of Lindy Hop to his life was a natural one. Adam started dancing in 1997 just a few months before the infamous GAP ad and was dancing five nights a week. In 2001 he moved to Beijing, China where he started the Lindy Hop scene and led a 17 piece big band. In 2010 he returned to the USA to do a Master’s degree in Music Education at NYU, and a few years later moved back to his home state of California, where he taught high school band and was the bandleader and music director for the LA Swing Barons. He presently is working on his Ph.D. in Jazz Studies at the University of Pittsburgh, teaches Lindy Hop for Tartan & Panther Swing, and directs and arranges the music for a nine-piece swing band, The Pitt Vipers. His passion is for the music of the swing era, specifically that of the Kansas City sound from the '30s. As a devotee of historical accuracy and cultural legacy, he teaches classes on music history and theory at every Lindy Hop and jazz dance event he can, which has included Lindy Focus, Swingin' at the Savoy, Herrang Dance Camp, and more. 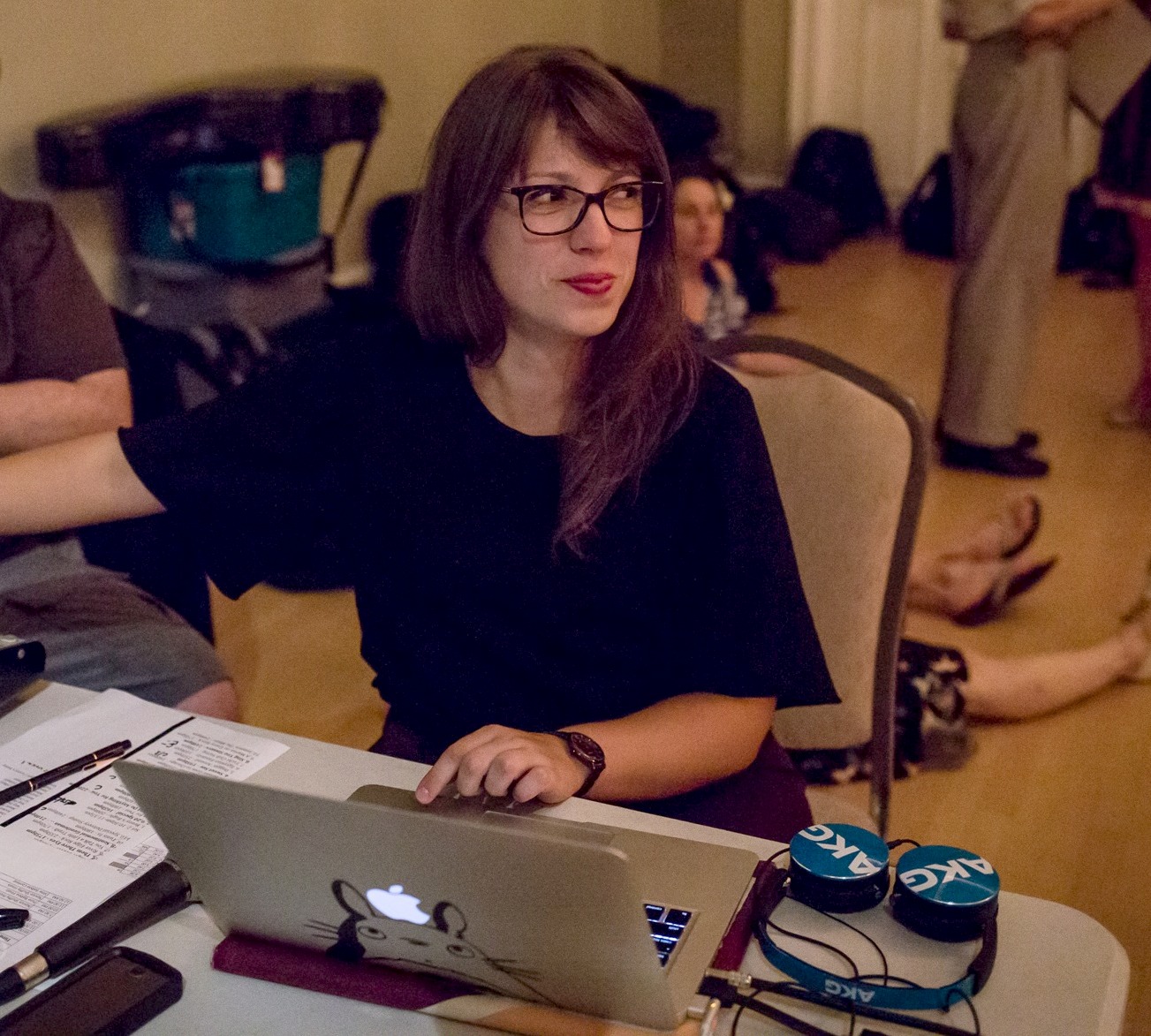 Ann began swing dancing in 2008 in Waterloo, Canada (not far from Toronto) and now lives in the US. Since getting her first songs, she has DJed in her home scenes including the one she founded in Switzerland called Swingtime Lausanne. She has had the fortune of playing swing for evenings and workshops around the world as well, as she is the perennial head DJ at Great Lakes Balboa Escape in Chicago. Digging through old stuff and new (soft spot for the original stuff), small group to big band to Newport, North American and European, she aims to create an atmosphere worthy of creativity and playing around with the dance.